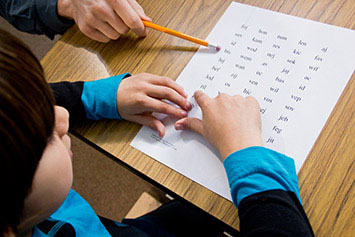 DIBELS ® (Dynamic Indicators of Basic Early Literacy Skills) is a set of procedures and measures for assessing the acquisition of literacy skills. They are designed to be short (one minute) fluency measures that can be used to regularly detect risk and monitor the development of early literacy and early reading skills in kindergarten through eighth grade.

DIBELS was developed to measure recognized and empirically validated skills related to general reading outcomes. Each subtest has been thoroughly researched and demonstrated to be a reliable and valid indicator of early literacy development. When implemented as recommended, DIBELS results can be used to evaluate individual student development as well as provide grade-level feedback toward validated instructional objectives.

The research-based subtests are predictive of later reading proficiency and contribute to a composite score that is the single best predictor of later reading development. The measures are consistent with many of the Common Core State Standards in Reading, especially those for Foundational Skills. Combined, the measures form an assessment system of early literacy development that allows educators to readily and reliably determine student progress in kindergarten through eighth grade.

DIBELS was developed based on Curriculum-Based Measurement (CBM), which were created by Deno and colleagues through the Institute for Research and Learning Disabilities at the University of Minnesota in the 1970s-80s (e.g., Deno and Mirkin, 1977; Deno, 1985; Deno and Fuchs, 1987; Shinn, 1989). Like CBM, DIBELS were developed to be economical and efficient indicators of a student's progress toward achieving a general outcome. Mark Shinn (Professor in the College of Education at the University of Oregon for 19 years) actually originated the name “Dynamic Indicators of Basic Skills” (Shinn, 1989, 1999).

Although DIBELS materials were initially developed to be linked to the local curriculum (Kaminski & Good, 1996), current DIBELS measures are generic and do not draw content from any specific curriculum. The use of generic CBM methodology is typically referred to as General Outcome Measurement (GOM) (Fuchs & Deno, 1994).

Research on DIBELS is conducted at the University of Oregon (UO) and began in the late 1980s. Since then, an ongoing series of studies on DIBELS has documented the reliability and validity of the various DIBELS subtests, as well as their sensitivity to student change. Research on DIBELS continues to this day at the UO's Center on Teaching and Learning (CTL) and has been conducted by dozens of UO faculty and students (e.g., Cummings, Park, & Bauer Schaper, 2013; Cummings, Stoolmiller, Baker, Fien, & Kame’enui, 2015; Smolkowski & Cummings, 2016; Stoolmiller, Biancarosa, & Fien, 2013).

Researchers at UO began work on DIBELS 8th Edition in 2016 and over the course of three years have been hard at work making the 8th Edition of DIBELS better than any previous DIBELS edition. DIBELS 8th Edition represents the culmination of decades of research into supporting students in becoming successful readers. In many ways, the DIBELS 8th Edition does not look all that different from prior editions of DIBELS, including DIBELS Next. But DIBELS 8th Edition is more useful for more students in more grades than ever before. Research and development are ongoing, including studies validating DIBELS 8th Edition as a dyslexia screener and creating new subtests for skills like encoding and initial sound identification. CTL is committed to working diligently on the continuous improvement of DIBELS and provide DIBELS users with the best and most informative data on their readers as possible.